As I stood beneath a tree, eyes closed, basking in the sun, listening to the sounds of the forest, a particular noise caught my attention and prompted some wondering… 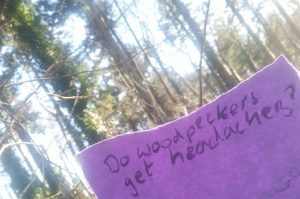 …surely all the drumming can’t do a woodpecker’s brain much good!? Have a look at the video in the link below to remind yourself of this noise and witness the extraordinary capabilities of this bird! 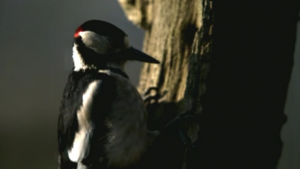 What is he doing?

Unlike many other birds, woodpeckers don’t have a distinctive song. Instead, they drum their bills on trees, making the distinctive hammering noise to communicate, mark their territory and to attract a mate. The drumming is also the result of woodpeckers pecking into tree bark to eat insects with their long tongues- this is the most common reason for drumming, so the woodpecker I heard in the woods was probably tucking into his morning insect snack! They also peck when making nests and when storing food in the holes they have made.

How does he make that sound?

Woodpeckers are not making the distinctive drumming noise vocally, as used to be believed, but by using their bills to repeatedly hit the surface of an object that resonates sound, such as trees or even artificial objects such as fence posts! This sound can travel over long distances and be heard by other birds. The tempo and rhythm of the drumming depends on the species and purpose of the woodpecker.

I wonder what species of woodpecker I heard in the woods…

Only 3 different species of woodpecker are found in the UK so my woodpecker must’ve been one of these:

If you have a look at this  RSPB website and click on the different photos you can also hear the different calls of the different species! Tools like this are very helpful for identification. It’s helped me come to the conclusion that I probably heart a Great spotted woodpecker when I was in the woods.

Surely he’ll get a headache?

Special adaptions ensure woodpeckers can hammer into hard objects without hurting their heads. They have thicker skulls that are are cushioned by many pockets of air reinforced by bone tissue, absorbing the force resulting from the hammering…sometimes 20 times per second! Woodpeckers also have a special tongue bone that holds the brain in place as well as strong neck muscles to avoid strain. Also, having a thick, robust, straight bill helps them to endure the impact of all that pecking!

What an amazing bird!

National Geographic. (2012) Woodpeckers vs. the World

The Wildlife Trusts. (No Date) Where to see woodpeckers

Woodland Trust. (No Date) Listen out for drumming woodpeckers